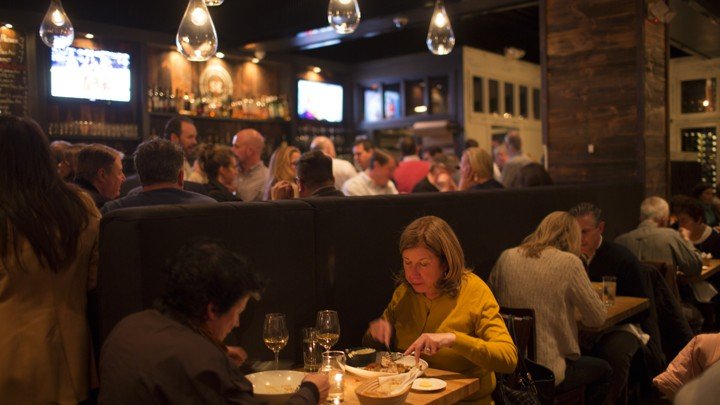 Let me describe what I hear as I sit in a coffee shop writing this article. It’s late morning on a Saturday, between the breakfast and lunch rushes. People talk in hushed voices at tables. The staff make pithy jokes amongst themselves, enjoying the downtime. Fingers clack on keyboards, and glasses clink against wood and stone countertops. Occasionally, the espresso machines grind and roar. The coffee shop is quiet, probably as quiet as it can be while still being occupied. Even at its slowest and most hushed, the average background noise level hovered around 73 decibels (as measured with my calibrated meter).

That’s not dangerous—noise levels become harmful to human hearing above 85 decibels—but it is certainly not quiet. Other sounds that reach 70 decibels include freeway noise, an alarm clock, and a sewing machine. But it’s still quiet for a restaurant. Others I visited in Baltimore and New York City while researching this story were even louder: 80 decibels in a dimly lit wine bar at dinnertime; 86 decibels at a high-end food court during brunch; 90 decibels at a brewpub in a rehabbed fire station during Friday happy hour.

Restaurants are so loud because architects don’t design them to be quiet. Much of this shift in design boils down to changing conceptions of what makes a space seem upscale or luxurious, as well as evolving trends in food service. Right now, high-end surfaces connote luxury, such as the slate and wood of restaurants including The Osprey in Brooklyn or Atomix in Manhattan.

This trend is not limited to New York. According to Architectural Digest, mid-century modern and minimalism are both here to stay. That means sparse, modern decor; high, exposed ceilings; and almost no soft goods, such as curtains, upholstery, or carpets. These design features are a feast for the eyes, but a nightmare for the ears. No soft goods and tall ceilings mean nothing is absorbing sound energy, and a room full of hard surfaces serves as a big sonic mirror, reflecting sound around the room.

The result is a loud space that renders speech unintelligible. Now that it’s so commonplace, the din of a loud restaurant is unavoidable. That’s bad for your health—and worse for the staff who works there. But it also degrades the thing that eating out is meant to culture: a shared social experience that rejuvenates, rather than harms, its participants.

Luxury didn’t always mean loud, and there are lessons to be learned from the glamorous restaurants of the past, including actual mid-century-modern eateries. From the 1940s through the early 1990s, fine-dining establishments expressed luxury through generous seating, plush interiors, and ornate decor. But more important, acoustic treatments themselves were a big part of that luxury.

Surfaces that today’s consumers now consider old-fashioned were still relatively new and exciting in the interwar and postwar periods. Just as stainless-steel tabletops, slate-tile floors, and exposed ductwork seem au courant today, so did wall paneling and drop ceilings with acoustic tiles in the 1950s and ’60s.

Architects also had different conceptions of what ideal work and leisure spaces should sound like. In the early to mid-20th century, designers were startled to discover that they might have some control over the aural impression of a physical space. Just as automobiles and kitchen appliances were seen as technological solutions to problems of everyday life, so ambient noise shifted from a symbol of progress in the machine age to a problem it produced—one that demanded a solution.

Early acoustics materials focused on absorbing sound—soaking up sonic energy rather than reflecting it. That approach produced its own idiosyncratic soundscape. As the science historian Emily Thompson explains in her book The Soundscape of Modernity, absorptive materials removed reverberation, producing “clear and direct” sound. “In a culture preoccupied with noise and efficiency,” Thompson writes, “reverberation became just another form of noise, an unnecessary sound that was inefficient and best eliminated.”

Absorptive design found its way first into schools and offices, where acoustics products were marketed as essential to creating quieter interiors and thus more efficient and less distraction-prone workers (or students). These products were advertised as “sound-conditioning” devices that would purify an environment of “unnatural” sounds. In catalogs for commercial and home interiors, sound-absorptive surfaces were linked directly to comfort, sophistication, and luxury.

Today’s interior designs are often seen as throwbacks to classic mid-century-modern spaces—sparse and sleek, with hardwood floors and colorful Danish chairs with tapered legs seated beside long, light-colored wood tables. The contemporary revival of this style tends to highlight these features to excess. However, photographs of restaurants from the 1950s through the 1970s reveal that interiors were opulent in the more luxurious lounges and supper clubs. Trends that today’s diners associate with luxury, such as hard surfaces and open kitchens, were, in mid-century, mainly relegated to lowbrow spaces such as cafés, cafeterias, and diners. The finest eateries—such as French and specialty restaurants, exclusive lounges, and cocktail bars—were the most highly ornamented and plush. Even high-modernist interiors made extensive use of soft goods, including cloth tablecloths, heavy drapes, carpeted floors, and upholstered seating. Across the board, mid-century restaurants had low ceilings, often with acoustic ceiling tiles.

Until the mid-1970s, fine dining was associated with ornate, plush fussiness, not stark minimalism. In her book Smart Casual: The Transformation of Gourmet Restaurant Style in America, the design historian Alison Pearlman attributes this choice to the influence of top-rated French restaurants such as Manhattan’s Le Pavillon. Pearlman writes of the decor: “Abundant flower displays, chandeliers and/or sconces, velvet curtains and/or damask wall treatments, tablecloths, and formally structured place settings of fine china and crystal were still typical.” Those choices produced a different acoustic environment: “Sound levels were low enough to magnify not only the tink-tink of glasses and silver but also the manners faux pas.”

Since then, Pearlman argues, restaurants have become more and more casual, severing the link between luxurious interiors and highbrow taste. It started in the mid-1970s, when highly rated restaurants began to integrate lowbrow influences such as country-farmhouse decor, along with the atmosphere and casual serving styles of cafés and brasseries. Pearlman traces the origin of highbrow minimalism to the restaurant Michael’s, which opened in Santa Monica, California, in 1979. Sparsely decorated inside a modernist house from the 1930s, Michael’s also began to sever the link between fussy table service and fine dining: Its cheery, attentive staff all wore Ralph Lauren polo shirts.

Another feature of today’s restaurants that greatly increases the loudness inside are open kitchens—where the making of the food is on full display. This design used to be relegated to the lowly diner. But fine-dining restaurants began to expose their kitchens during the 1970s and early ’80s; Pearlman attributes the trend to Wolfgang Puck (though he didn’t invent the idea). Puck’s restaurant Spago, which opened in 1982, was one of the first high-profile restaurants to feature a centrally located brick oven, and was met with widespread critical acclaim. Other design trends that increased the volume of eating establishments also got their start at this time, including the communal table and full-service bar dining.

Bars and restaurants continued to merge through the 1990s and 2000s, and that’s a big reason restaurants, on the whole, got noticeably louder. Bars are raucous, and they present a different dining atmosphere from typical sit-down restaurants. As the bar and dining area began to occupy the same space, their clientele and atmospheres combined, and the result was a lot louder than either one alone. Open-concept restaurants and warehouse-style gourmet food courts have made dining out more casual and communal, but getting rid of the walls, ceilings, and soft goods that once defined luxury have also made them noisier.

Restaurant critics and journalists have long complained about noisy restaurants (San Francisco Chronicle food reporters have carried around sound-level meters since the late 1990s), but in recent years the clamor against clamor has reached new heights. Like the open office, the loud restaurant seems to have overstayed its welcome.

Beyond the cost in dollars, diners also pay this price in other ways. Noise levels such as the ones I recorded are linked to unhealthy food choices and excessive alcohol consumption, for one. But they also pose an occupational hazard to the staff members who have to withstand such loudness for hours at a time. For those working back-to-back shifts, exposure to these high sound levels could even violate occupational work and safety laws.

The merger of fine and casual dining seems to show no signs of abating. As a result, even moderately quiet restaurants have become few and far between. Things have gotten so bad, there’s even an app for helping potential diners find quieter places to eat. The culinary establishment once aimed to dismantle the stuffiness and high cost of dining out by blurring the line between casual and fine dining, eliminating classist dress codes, and make dining a more collective experience. But ironically, that democratization of eating out has produced a new and more hidden tyranny: making people tolerate unhealthy, distracting noise for good food—and then duping them into spending more, drinking more (along with the risk of vulnerable situations that can result from alcohol), and shouting over the din to socialize. By comparison, the worst thing that could happen at one of the upscale establishments of old was using the wrong fork or running afoul of the dress code.

I’m not calling for the return of stuffy, socially stratified fine dining. After all, today’s elite restaurants are often quite pricey, and people are eating out more than ever. Rather, I’d welcome a return of a more relaxed and serene dining experience, one in which I can hear my dinner companion, avoid drinking too much, and dodge a stress headache following an after-work drink.

That change might be harder than it sounds. It took decades for quiet, contemplative dining to give way to today’s raucousness. That’s because the physical construction of restaurants had to change in tandem with the culture supporting it.

Architectural acoustics—a field that integrates architecture, building construction, and the physics of sound—is part building engineering (mitigating noise and vibrations) and part design. In the latter, more glamorous role, acousticians deploy a wide range of materials and construction techniques to sculpt pleasant-sounding spaces that service a building’s function, be it a restaurant or a concert hall. Unfortunately, acoustics is often an afterthought, something used to correct errors after construction if noise proves annoying. By then, it’s too late.

That’s because every aspect of a building’s design impacts the way it sounds: how the HVAC system is routed, the kind of wall insulation, the thickness of windows, and even how the electrical outlets are sealed. It’s a fussy, nuanced effort that’s inseparable from the architecture and construction of the space itself. A restaurant or shop that’s loud because the ceilings are too high or because there’s nothing separating kitchen or bar noise from areas for table seating has space-planning problems. They can’t be fixed by hanging some fiberglass panels to dampen the noise.

Acousticians can be expensive, and many retail designers figure that they can get away without one. Worse, commercial architectural acoustics has historically involved designs that offend architects and business owners—think of those dowdy dropped ceilings of mid-century schools and offices. For glossy retail spaces and fancy restaurants, they were too much of a drag. But then again, so were hoity-toity fine-dining establishments 40 years ago, when the shift to today’s dining din began.

There is hope, however. Inspired by the need for new solutions in tricky spaces such as open offices, industrial design for acoustics has evolved dramatically in recent years. A whole new slate of ceilings, walls, and even acoustic furniture has become available. Quiet doesn’t need to mean ugly anymore. That means choosing “good” design over the comfort and well-being of patrons is no longer a suitable excuse for restaurateurs. It’s time to take loud off the menu.

Back to News
Scroll To Top